The reactors, in which chemicals are made in industry, vary in size from a few 3cm to the vast structures that are often depicted in photographs of industrial plants. The design of the reactor is determined by many factors but of particular importance are the thermodynamics and kinetics of the chemical reactions being carried out.

The two main types of reactor are termed batch and continuous.

Batch reactors are used for most of the reactions carried out in a laboratory.  The reactants are placed in a test-tube, flask or beaker.  They are mixed together, often heated for the reaction to take place and are then cooled.  The products are poured out and, if necessary, purified.

This procedure is also carried out in industry, the key difference being one of size of reactor and the quantities of reactants. 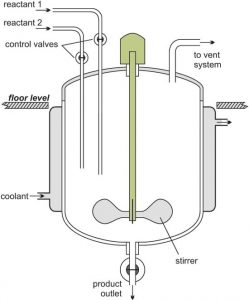 Following reaction, the reactor is cleaned ready for another batch of reactants to be added.

Batch reactors are usually used when a company wants to produce a range of products involving different reactants and reactor conditions.  They can then use the same equipment for these reactions.

An alternative to a batch process is to feed the reactants continuously into the reactor at one point, allow the reaction to take place and with draw the products at another point.  There must be an equal flow rate of reactants and products.

Continuous reactors are normally installed when large quantities of a chemical are being produced.  It is important that the reactor can operate for several months without a shutdown

In a tubular reactor, fluids (gases and/or liquids) flow through it at high velocities.  As the reactants flow, for example along a heated pipe, they are converted to products (Figure 4).  At these high velocities, the products are unable to diffuse back and there is little or no back mixing.  The conditions are referred to as plug flow. This reduces the occurrence of side reactions and increases the yield of the desired product.

With a constant flow rate, the conditions at any one point remain constant with time and changes in time of the reaction are measured in terms of the position along the length of the tube.

A heterogeneous catalyst is used frequently in industry where gases flow through a solid catalyst (which is often in the form of small pellets to increase the surface area). It is often described as a fixed bed of catalyst (Figure 2). 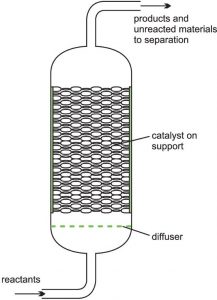 A further example of a fixed bed reactor is in catalytic reforming of naphtha to produce branched chain alkanes, cycloalkanes and aromatic hydrocarbons using usually platinum or a platinum-rhenium alloy on an alumina support.

A fluid bed reactor is sometimes used whereby the catalyst particles, which are very fine, sit on a distributor plate. When the gaseous reactants pass through the distributor plate, the particles are carried with the gases forming a fluid (Figure 3).  This ensures very good mixing of the reactants with the catalyst, with very high contact between the gaseous molecules and the catalyst and a good heat transfer.  This results in a rapid reaction and a uniform mixture, reducing the variability of the process conditions.

One example of the use of fluid bed reactors is in the oxychlorination of ethane to chloroethane (vinyl chloride), the feedstock for the polymer poly(chloroethene) (PVC).  The catalyst is copper(II) chloride and potassium chloride deposited on the surface of alumina.  This support is so fine, it acts as a fluid when gases pass through it.

Another example is the catalytic cracking of gas oil to produce alkenes (ethane and propene) and petrol with a high octane rating.

Figure 4 :  A catalytic cracker as used to produce alkenes from gas oil.

A silica-alumina catalyst is used but fine particles of carbon are rapidly deposited on its surface and the catalyst quickly becomes ineffective.  The catalyst, still in the form of a fluid, is regenerated as it passes into a second vessel where it is heated strongly in air (sometimes with added oxygen) burn off the carbon (Figure 7) and then returned into the reaction zone and mixed with gas oil.

These reactors are larger than fixed bed reactors and are more expensive to construct.  However, it is easier to control the conditions and the process is more efficient.

In a CSTR, one or more reactants, for example in solution or as a slurry, are introduced into a reactor equipped with an impeller (stirrer) and the products are removed continuously.  The impeller stirs the reagents vigorously to ensure good mixing so that there is a uniform composition throughout.  The composition at the outlet is the same as in the bulk in the reactor.  These are exactly the opposite conditions to those in a tubular flow reactor where there is virtually no mixing of the reactants and the products. 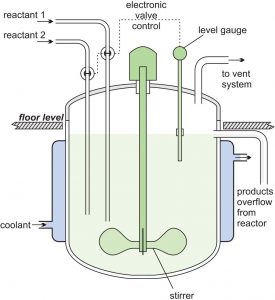 A steady state must be reached where the flow rate into the reactor equals the flow rate out, for otherwise the tank would empty or overflow.  The residence time is calculated by dividing the volume of the tank by the average volumetric flow rate.

A CSTR reactor is used, for example in the production of the amide intermediate formed in the process to produce methyl 2-methylpropenoate. Sulfuric acid and 2-hydroxy-2-methyl propanonitrile are fed into the tank at a temperature of 400 K.  The heat generated by the reaction is removed by cooling water fed through coils and the residence time is about 15 minutes.

A variation of the CSTR is the loop reactor which is relatively simple and cheap to construct (Figure 6). In the diagram only one loop is shown.  However, the residence time in the reactor is adjusted by altering the length or number of the loops in the reactor.

Loop reactors are used, for example, in the manufacture of poly (ethane) and the manufacture of poly (propene). Ethane (or propene) and the catalyst are mixed, under pressure, with a diluent, usually a hydrocarbon.  A slurry is produced which is heated and circulated around the loops. Particles of the polymer gather at the bottom of one of the loop legs and, with some hydrocarbon diluent, are continuously released from the system.  The diluent evaporates, leaving the solid polymer, and is then cooled to reform a liquid and passed back into the loop system, thus recirculating the hydrocarbon.